Can The Republic Survive a Multitude of Fools? 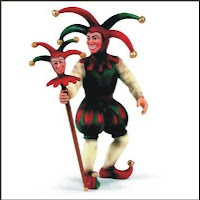 The following quotation came to me in an email.  These remarks dovetail perfectly with the two posts about education that immediately precede this post.

Some people have the vocabulary to sum things in a way you can understand.  This quote was translated into English from an article appearing in the Czech Republic as published in the Prager Zeitung of 29 April 2010.


The danger to America is not Barack Obama but a citizenry capable of entrusting a man like him with the Presidency.  It will be far easier to limit and undo the follies of an Obama presidency than to restore the necessary common sense and good judgment to a depraved electorate willing to have such a man for their president.  The problem is much deeper and far more serious than Mr. Obama, who is a mere symptom of what ails America.  Blaming the prince of the fools should not blind anyone to the vast confederacy of fools that made him their prince.  The Republic can survive a Barack Obama, who is, after all, merely a fool.  It is less likely to survive a multitude of fools such as those who made him their president.

It took just a few decades to "educate" a population that was willing to elect a man with such radical left-wing views and no executive experience whatsoever.  Poorly educated people are easily misled.  That explains why liberal/progressive politicians oppose free choice and competition in education.  Union schools give them a poorly educated population, which in turn gives them the power to control people.
Posted by Erica at 11:36 AM