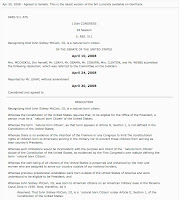 Take a very close look at the summary of Senate bill S.2678 on the left and Senate Resolution 511 on the right (click to enlarge).  Note the names of the sponsor and cosponsors, and note the dates!  Even though S.2678 did not get past committee, it served its purpose in the media, especially when Sen. McCaskill pushed through Senate Resolution 511.  They hoped to put the public's mind to rest about eligibility for the presidency." After that, these players felt ready to sail ahead into the election without kickback from the public.  Or so they thought!

About a year ago a blogger called Zapem published this article to explain how and why Obama's nomination for President was engineered. The facts remain the facts, regardless of the time since Zapem's telling words were written, so every now and then we must remind ourselves of the people who ignored the Constitution for personal gain and power.

Please read this article, and remember the players, because we must never let this happen again.

If one were to look at the activity on Capitol Hill during the campaign, there would be no question in their minds that both McCain and Obama were sweating the “natural born citizen” issue.
How do we arrive at that conclusion? We take McCain’s ingrained, glib advice and “Look at the record, my friends“.


Click the title to read the full article and reader's comments.

(also see:  A Roadmap to Fraud in Texas in the 2008 Presidential (Electors) Election)
Posted by Erica at 8:42 AM