Kenyan Minister Khalwale Asks When Obama Will Repatriate Himself 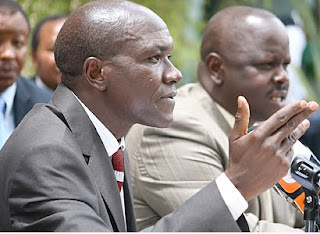 The following transcript is of an April 14, 2010 debate on the floor of the Kenyan National Assembly.  The question under discussion concerns the repatriation of Kenyan artifacts which were removed from the country by colonialists.  The Ministers want to know what is being done to return the artifacts, or failing their return, how and when Kenya will be compensated for their loss.  They argue that museums in the US and elsewhere have earned money on these artifacts, thus those countries are indebted to Kenya.  Importantly, in 2006, when Barack Obama visited Kenya, strategized with, and campaigned on behalf of Raila Odinga, the Senator also promised to help with the return of artifacts to Kenya or to seek financial compensation.

The most amazing question asked on the floor is by Dr. Bonny Khalwale, of the Ikolomani Constituency, and concerns the "repatriation" of Barack Obama!  Dr. Khalwale's remarks are highlighted in red in one of the paragraphs below the fold.

If I was allowed a vote in the Kenyan National Assembly, I would happily vote yea for repatriating Barack Obama to his "home country" (0:45).  What say you?

Excerpt below came from this pdf:
[UPDATE:  When the link below was published here, it worked just fine. On 5/30/10, I discovered that the document has since disappeared from the Kenyan Parliament website.  However, the document is available in its entirety HERE.]
http://www.bunge.go.ke/parliament/index.php?option=com_docman&task=doc_download&gid=64&Itemid=

Question No.145
LIST OF CULTURAL ARTEFACTS MOVED FROM
KENYA BY COLONIALISTS/FOREIGNERS

Mr. James Maina Kamau asked the Minister of State for National Heritage and
Culture:-
(a) whether the National Museums of Kenya (NMK) has a list of cultural artefacts moved from Kenya by former colonialists and other foreigners or in possession of people outside the country and, if so, what the NMK and the Ministry are doing to recover these artefacts, indicating the specific date by which the country expects to have the artefacts returned;
(b) if he could confirm that in 2006, the then Senator Barrack Obama promised to support NMK and the Ministry in the identification and return of the artefacts held in the United States;  and,
(c) what the Ministry is doing to follow up on the promise, considering that Mr. Obama is now the US President.

The Minister of State for National Heritage and Culture (Mr. ole Ntimama): Mr.
Speaker, Sir, I beg to reply.
(a) I admit that the NMK does not have a comprehensive list of all the artefacts moved from Kenya by former colonialists, as no documentation was done when they were leaving the country. The only list in our possession is of the artefacts some of the museums and institutions abroad have and not what is in private hands.

Mr. Speaker, Sir, nevertheless, Kenya is a state party to United Nations Educational, Scientific and Cultural Organization (UNESCO) and has been negotiating for the return of the cultural artefacts under the support of the Inter-Government Committee for Promoting the Return of Cultural Property to its countries of origin or its restitution in case of illicit appropriation. It is, therefore, not possible to give specific dates for their return as the Ministry must work under the guidelines of this UNESCO Committee. In addition, the National Museums of Kenya is working with museums abroad to identify what is Kenyan and has put in place modalities for their return upon identification. Towards that end, progress has been made with return of some of the artefacts from the United Kingdom (UK) and, United States of America (USA) in 2007 and 2008 respectfully.

Mr. Speaker, Sir, it is true that the delegation from my Ministry and the National Museums of Kenya visited the USA to recover cultural material, specifically the Kigango which is a sculptured post erected, as part of the Mijikenda ritual, memorizing the spirit of a male who has died.

However, Hampton University in Virginia USA were reluctant and unwilling to release the identified Kigango for repatriation, which prompted my Ministry to conduct the then Senator Barrack Obama’s office for assistance. However, I would like to assure the Member of Parliament that the Senator’s office was of great assistance and Kigango was eventually released and repatriated to Kenya and has since been returned to the respective family in Kilifi District. I confirm that my Ministry’s officials especially the National Museums of Kenya are working hard to identify any other Kenyan artefacts in the USA, the UK and elsewhere in the world. Also my Ministry with the help of the Ministry of Foreign Affairs has contacted Kenyan embassies abroad requesting them to assist in the identification and location of these artefacts. In case of any difficulties in returning the identified ones to Kenya, we shall seek assistance from the respective governments of the world.

Mr. James Maina Kamau: Mr. Speaker, Sir, I would like to appreciate the answer given by the hon. Member but I would like to indicate to this House that there are over 2,000 lying out there, especially in the British Museum. Others are spread across the USA Museum. What are they doing? It looks like it is taking them too long to make sure that those artefacts are brought to Kenya? We need them in Kenya because they are important. They teach our young people what was happening in those days.

Mr. ole Ntimama: Mr. Speaker, Sir, as I have said in my answer, we are trying our best and the good team from my Ministry has been visiting some of these countries to try and identify all the artefacts that are there and negotiate their return. So, we are not asleep but doing our best.

Dr. Khalwale: Mr. Speaker, Sir, the Minister has told us that the office of the then Senator Obama gave him a lot of assistance. That is very good to hear. Could he tell us what commitment the same office made by way of compensation to this country because those artefacts in those museums have been attracting visitors who were paying to view them? What commitment did they make about compensation and more importantly, the biggest artefact in the USA today that belongs to this country is one Barrack Obama. How does he intend to repatriate himself or part of the money that is realized from all the royalties that he is attracting across the whole world?

The Assistant Minister for Roads (Dr. Machage): On a point of order, Mr. Speaker, Sir. Is the hon. Member right to refer to the President of the USA as an artefact? Mr. Speaker: Dr. Khalwale, you are out of order! The President of the USA cannot be classified as an artefact. You should withdraw and apologize. Dr. Khalwale: Mr. Speaker, Sir, as I withdraw and apologize, may I clarify that this was not mischief. In one of the museums in USA---

Mr. Speaker: Order, Dr. Khalwale! I have given directions. If you wish, you can quote to the House, perhaps a medical dictionary, but I am certain that the English dictionary will not define the word “artifact” as including any human being, let alone President Obama. Dr. Khalwale: Mr. Speaker, Sir, most obliged. My withdrawal and apology still stands but I just wanted to clarify that the artefacts that I am referring to indeed exist. It was not the hon. Obama. If you go to the museum in Washington, there is a huge statue not just of Obama alone but also his wife and all the previous presidents of the USA.

Mr. Speaker: Order, Dr. Khalwale! If you are referring to a statue then you should have said so but that is not what you said. Please, Dr. Khalwale, do not be vexatious and neither should you be frivolous. As a medical practitioner, I expect much more out of you. Even as a Member of Parliament. And you must stop there, I am afraid! I rule you out of order.

Dr. Khalwale: Mr. Speaker, Sir, the matter rests but then it brings me to the issue of compensation. What commitment has the USA made in the need to compensate this country for all the money that they have earned over the years from our artefacts in their museums?

Mr. ole Ntimama: Mr. Speaker, Sir, do not forget that we are dealing with independent nations just like Kenya. Do not also forget that we were colonies of other people for a long time and they had the opportunity to collect those artefacts from private people and other institutions and take them to their land. What we are trying to do now is to negotiate and bring those artefacts back. We are not talking of compensation yet because that is also a complicated affair which has to be calculated in many ways.

Mr. Speaker, Sir, I want to thank you just for one thing: controlling frivolity because some people talk so freely in this Parliament that they do not consider that some of the things they talk about are frivolous.

Mr. Ruto: On a point of order, Mr. Speaker, Sir. With great respect for the hon. Minister, who is very senior, is it in order for him to assist you in determining what is frivolous and what is not while we know you are quite competent?

Mr. Speaker: Order! Order! Mr. Minister, you need not respond to that. Hon. Ruto, I am afraid you, yourself, on that point of order are being frivolous and vexatious. What you have uttered amounts to an abuse of the proceedings of Parliament! The hon. Member for Kandara, you did not ask the last question. I think that matter rests there.

Mr. James Maina Kamau: Thank you, Mr. Speaker, Sir. Among the items that this country needs most, we have the famous freedom fighters like Koitalel arap Samoei, who was deemed to have been among the first freedom fighters in this country. When he was killed, his skull was taken to the British Museum. What is the Minister doing to make sure that, that skull and the famous man-eaters of Tsavo are returned to Kenya?

Mr. ole Ntimama: Mr. Speaker, Sir, the case of Samoei and other heroes and whatever happened to them, we are following up very, very closely, indeed.

Mr. Speaker: Order! Order! Mr. Minister, will you respond to the aspect on man-eaters of Tsavo; when will they be returned?

Mr. James Maina Kamau: And why it has taken so long---

Mr. ole Ntimama: Thank you very much, Mr. Speaker, Sir. I had wanted to mention the case of the man-eaters of Tsavo. We have really tried to put this case to the Illinois Museum in United States; we are even now sending our experts there. The problem now is that the US Museum is saying that they bought the man-eating lions of Tsavo from a man called “Patterson”. The lions cost them so much money that they are saying that they will not release them until they get their money back. That is actually the whole position today. Patterson was the name of the man who shot the lions in Tsavo. 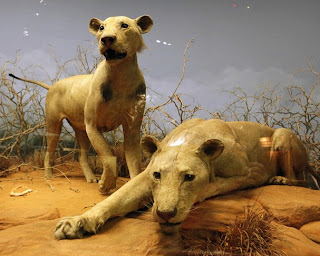