Complaints of 2008 Election Fraud Filed in Six States | by EricaThunderpaws 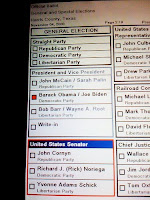 With the inspiration and help of a legal blogger referred to as jbjd, citizens in Georgia, Hawaii, Maryland, South Carolina, Texas and Virginia have for many months been filing citizen complaints of election fraud with their state Attorneys General against Democratic Party officials. These states have election laws which explicitly require political party leaders to certify that electors or candidates are constitutionally eligible prior to placing candidates' names on the ballot.  Other states may have similar laws, so citizens in those states should begin investigating their laws to see if they can follow suit.

These citizen complaints of fraud do not argue whether Obama is, or is not, a natural born Citizen.  Rather, the complaints argue that Democratic Party leaders failed in their legal duty to ascertain the eligibility of Barack Obama before placing his name on the ballot.  Evidence of their failure to ascertain his eligibility is cited within each state's citizen complaint. Thus party leaders' signed and notarized certifications, stating Barack Obama is constitutionally eligible, are claimed to be fraudulent.

These citizen complaints of election fraud put political party leaders on notice, because it means a growing number of citizens will be more vocal and more actively involved when the next presidential nomination process begins.  Furthermore, these citizen complaints should inspire all state legislators to amend their current laws, or write new laws to improve the process for placing names on the ballot.  Keep in mind, though, State legislators do not have the constitutional authority to define the meaning of the term "natural born Citizen".  That is not the purpose of these complaints.  However, legislators do have the authority to determine how a candidate or an elector's name gets onto a ballot.

At the very least, these citizen complaints should make it difficult to place Barack Obama's name on the 2012 ballot.  At best, if one or more of the state Attorneys General will investigate these citizen complaints, jbjd argues that through a legal action called mandamus, party leaders who signed the certifications can be ordered to declare that Obama is ineligible to be placed on the ballot.

State Attorneys General have the discretion to respond to these citizen complaints, or to ignore them.  To date, none have opened an investigation.   However, if hundreds more citizens, or better yet, thousands more citizens were to download the citizen complaint forms for their respective states, add their name and address, and fax the forms to their Attorneys General, there would be a greater likelihood that one or more of the AGs would open an investigation.  Because this is a hot-button issue that AGs may be reluctant to investigate, they need to feel intense pressure from their constituents before they will respond.

If you would like to join other citizens in your state in this initiative, you will find relevant articles on the subject, and state-specific citizen complaint forms available for download at http://jbjd.wordpress.com.  All queries about jbjd's initiative should be directed to her through the comment section of her articles.

Also see:  A Roadmap to Election Fraud in Texas in the 2008 Presidential (Electors) Election
Posted by Erica at 8:23 PM