The Zapem blog has produced a video, Twittergate - The Democrats Hire A Twitter-Thug, which details how the Democrats hired Neal Rauhauser, a Daily Kos blogger, to paint the tea party movement as racist, homophobic, extremist and every other pejorative you can imagine. Rauhauser owns a company co-founded with Beth Becker called Progressive PST.

Zapem says, "The evidence submitted demonstrates the systematic and deliberate provocation towards people in an attempt to elicit unfavorable responses after a series of malicious and vile attacks.  The idea was to antagonize, collect and present selected responses as proof of "extremism" within the Tea Party."
The means by which the Twitter-Thugs hoped to do this was by retweeting hateful comments, which they assumed would be made in response to vitriolic and vulgar comments made by the thugs.  To further guarantee their mission, they employed someone to assume a false tea party identity.  This very disgusting person called himself "WingNutWatch" and claimed in his Twitter profile that he hated blacks.
Any "useful" tweets that could be elicted from the thugs' victims were to be streamed to #teapartytracker on Twitter.  TeaPartyTracker.org is a domain registered by Blue State Digital, LLC, the same company that helped create MyBarackObama.com.  TeaPartyTracker was funded by George Soros.  The site was created for the purpose of "proving" that tea partiers are extremists.  Dana Loesch, the new editor-in-chief of Breitbart's BigJournalism.com,  did a follow-up story on this story on PJTV.  (Also listen to this blogtalkradio interview with Dana Loesch.)
Zapem also believes that this isn't the first time leaders at the Daily Kos have strategized against conservatives with a devious plan. Markos Moulitsas Zúniga stated unequivocally in an Olbermann interview (05:10) that Sen. John McCain was not a U.S. citizen because he was born in Panama.  This means Moulitsas has known all along that both candidates had issues regarding their qualifications as natural-born citizens and that this could be a problem.  Since our founders intended that only children born of two citizen parents on U.S. soil could be defined as natural-born citizens, the public had to be distracted.  If McCain had won the presidency, the leftwing would have used this information to destroy him.  Instead, they kept quiet to protect their man, Obama, who had a similar problem.
If all this is true, the worst thing Barack Obama, Moulitsas et al. had to worry about was for the public to raise questions about constitutional definitions.  Thus, Zapem is convinced that Obama arranged for Moulitsas to plant a Certification of Live Birth on the internet, knowing full well that conspiracy theories would blossom in response.
Think of it this way:  If everyone is arguing about whether or not Obama was born in the U.S. and/or that the Certification is a forgery, no one is paying attention to the constitutional definition of the term.  Furthermore, it was and continues to be an effective way to label conservatives with the pejorative "birthers".  And, of course, the media played along.  I would argue that some journalists may even have been strategic collaborators.  The scheme was a red herring, and it worked.
Here are some of Zapem's recent tweets on the birth certificate plot.  (Click to enlarge) 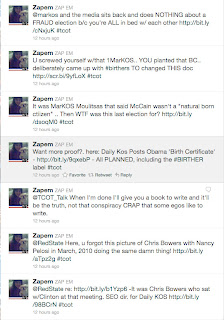 So, what else do we know about Moulitsas and his pals?
According to SourceWatch.org, Moulitsas claimed to have been trained by the CIA.  What better way to hone your skills in skullduggery?  Wonder how he got that internship.  Is a FOIA request in order?

In a June 6, 2006 speech to the Commonwealth Club in San Francisco, Zúniga stated that he had spent between six months and two years training at the Central Intelligence Agency in Washington, DC. In this speech Kos said began in 2001, before he started DailyKos,[5] and continued until the beginning of his involvement with the Howard Dean presidential campaign (late 2003/early 2004), which would mean that Zúniga was in training with the US CIA for as much as two years.[6]

[Note:  Based on recommendations from Steve at the UndeadRevolution, I have made a few alterations in the above article to better clarify the story.]
Posted by Erica at 7:56 PM