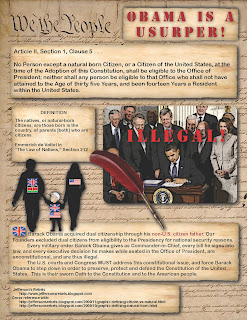 Click image to enlarge.  Also available on Scribd as a pdf.


Barack Obama has dual citizenship through his non-U.S. citizen father. Our Founders excluded dual citizens from eligibility to the Presidency for national security reasons.

Every order he gives as Commander-in-Chief, every bill he signs, and every executive decision he makes while seated in the Office of President, are unconstitutional and thus illegal.

The U.S. courts and Congress must address this and force Barack Obama, the usurper, to step down.
Posted by Erica at 6:29 PM